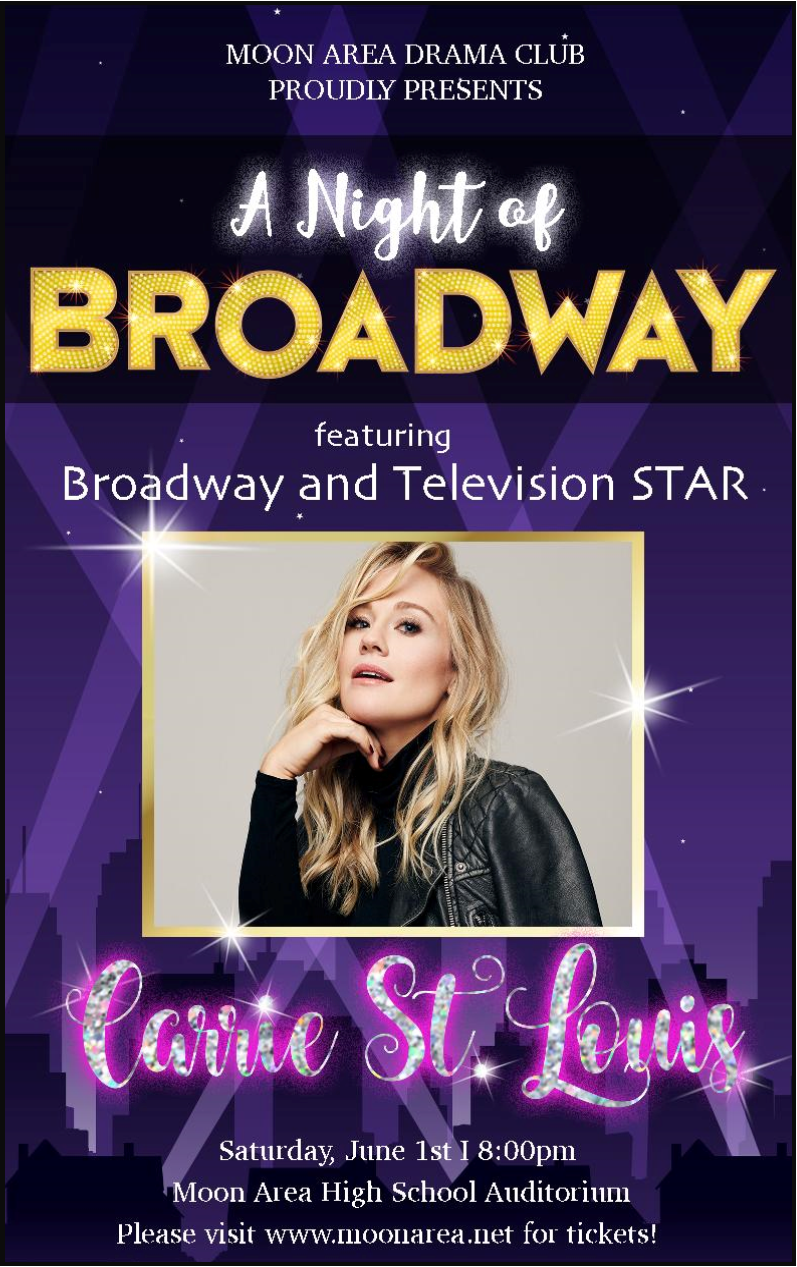 Moon Area High School Drama Club will host Broadway and television SUPERSTAR, Carrie St. Louis! Carrie will be teaching a master class in musical theatre to 15 student participants. Later that night, the students will participate in "A Night on Broadway" concert showcasing their showtunes. In addition, Carrie will be the special guest performer!

She began working professionally in the west coast premiere of The Fix after graduating from the Thornton School of Music at USC with a degree in Vocal Arts. She went on to play Amanda Bell in the world premiere of Justin Love at LA's Celebration Theater, which received an LA Drama Critics Circle Nomination for Best Production. She then moved to Las Vegas to open Rock of Ages at The Venetian Hotel, for which she was awarded Best Performance by a Leading Actress in a Musical by Broadway World Las Vegas.

Carrie made her Broadway debut as Sherrie in Rock of Ages in 2014. Later that year, she went on the road as Glinda in the national tour of Wicked. In 2016, Carrie returned to Broadway, starring as Glinda at the Gershwin Theater, for which she was nominated for a Broadway.com Audience Choice Award for Best Female Replacement in a long running show.

Her sold-out solo cabaret show in LA, Here I Go Again, received a Broadway World nomination for Best Female Cabaret in 2012. Her current solo show, Something Good, has been playing to sold out crowds at New York's iconic Feinstein's/54 Below.

Carrie recently had the honor of performing "For Good" with her Wicked co-star, Jennifer DiNoia, for First Lady Michelle Obama at a United Nations event in New York City. She's guested in concert with the band Foreigner, and she's sung the National Anthem for the LA Dodgers, LA Lakers, Chicago Cubs, New York Mets, New York Islanders and the PAC-12 Tournament.

In 2017, she starred Off-Broadway as Annette Hargrove in Cruel Intentions: The Musical, based on the cult-classic film, which received an Outer Critics Circle nomination for Best Off-Broadway Musical.

This summer, she will make her television debut on the hit CBS series, Elementary, working alongside Lucy Liu, Jonny Lee Miller, and Jon Michael Hall.

Currently, Carrie is starring on Broadway as Lauren in the Tony Award winning musical, Kinky Boots!